Hop Project #19 out in bottles! 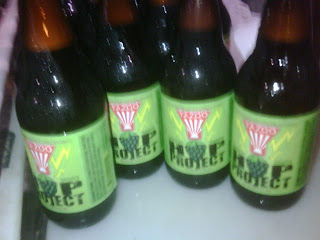 Hop Project #19 was bottled the 2nd week of August, look for the notches on the left side of the label. For this batch, we decided to use a lot more late-addition hops to mellow out the bitterness while getting a lot of flavor and aroma. We used Columbus for first wort, Cascade and Amarillo at 30 minutes left in the boil, and Zeus and Galena at 5 minutes left. We then dry-hopped it at day 4 in the fermenter with Cascade and Zeus.
The aroma from this one just won't sit still. It erupts out of the bottle and glass as you pour it in. You should have smelled the brewery as we bottled this batch, just simply amazing. The bitterness is clean, juicy, and leaves a nice lingering citrus zing across your teeth. A nice toasted caramel body tries to maintain balance, but hey, it's an IPA and the hops won't be denied.
Good news for hopheads in Alabam - we got label approval finally and will be shipping some kegs and bottles down in the next few weeks. If you loved the beer in the mysterious red Pleasure Chest at the last two Magic City Brewfests, you'll be happy to see Hop Project #19!
And finally, some Hop Project FAQ, answered:
1. What the heck is Hop Project?
- back before the Great Hop Crisis of 2007, we had a killer IPA recipe that we were ready to launch. Then we couldn't get the hops we needed to brew it. So we shelved that idea, but kept experimenting with the small quanitities of different hops that we could get our hands on, and putting the beer on tap in our Yazoo Taproom to get feedback from our regulars there. We noticed that the idea of changing up the hops was a big hit, and that people never got bored with the beer. Even if they had a favorite batch, they loved trying the newest one and seeing how the different hops played out across their enamel. So we decided to go ahead and launch our continuously-changing IPA, and call it "Hop Project". We change up the hop recipe for every batch, but keep the grain bill the same.
2. How can I tell which batch I'm drinking?
- Check the side of the label on the bottle. It will have the month and week the beer was bottled. Then just check back here to our blog, and scroll down to the posting for the Hop Project for that month.
3. Why couldn't you just mark the label with what batch number it is?
- Very good question! As usual, if there is a simple way to do it, the ATF will prohibit it. We initially submitted a label that told the story of Hop Project and stated that every batch was different. The ATF would not allow that, saying that we were misleading the consumer, and that if every batch was indeed different, we would have to submit a new label for approval for EVERY BATCH. That's right, by telling the customer that every batch was different, we were misleading the customer into thinking that every batch was the same. So we couldn't do anything on the label to indicate a certain batch number or anything. I know, it doesn't make sense. But those be the hoops, and we jumped through them.
4. Is Hop Project going to be a year-round beer?
- We probably will run out of hops this year. But we're working on securing enough next year to offer it year-round.
5. Where can I get a four-pack of Hop Project?

It's now carried in many mid-Tenn Krogers, and in Harris-Teeters, as well as many of your usual suspects for craft beer, like Midtown Beverage, Frugal Macdoogals, Woody's in Cool Springs, etc. Once great place to go is Whole Foods in Green Hills. Not only do they support the heck out of us with our bottles, but they also will fill you up a growler of Yazoo from the draft tower in the deli. Call ahead to Whole Foods to see which of our beers they have on tap, or just go and be pleasantly suprised. Believe me, it's a fun experience to see a growler of Yazoo being scanned at the checkout counter!
Posted by Linus at 7:40 AM

Yep, Just picked up some at Whole Foods in B'ham. Linus thanks for jumping through the hoops, I love the Pleasure Chest in bottles!