From Grimey's website, http://www.grimeys.com/:
"RECORD STORE DAY!!! - Saturday, April 18th, 10AM-8PM Our next all-day outdoor back parking lot party is coming up! And it's Record Store Day. Remember how off the chain last year was??? This year will be even bigger and better. We have the Avett Brothers, Mute Math and Black Joe Lewis & The Honeybears already lined up with many more acts in the works to be announced. Fresh exclusive releases, most of them vinyl, from Radiohead, Wilco, Sonic Youth, Jesus Lizard, Tom Waits, Flight Of The Conchords, Pavement, Iron & Wine and literally tons more to be announced in the coming weeks. The only place you'll be able to pick all of these releases up and see a free Avett Brothers show will be HERE! And of course we'll have our usual back lot sale with cr8zy bargains on cheap vinyl and CDs, plus the Yazoo beer truck, food, community partners, and all the goodness you've come to expect from a Grimey's outdoor event. Mark that calendar now, dood."
Holy crap, a free Avett Brothers show in the back parking lot??!! There will be people camping out for a spot! We'd better set the Yazoo van up the night before...
Posted by Linus at 8:18 AM 1 comment:

On tap this weekend

We'll have the following six beers on tap this weekend:

Yazoo High-Alc Beer: What would you like to see?

We think that we will soon be able to brew and sell beers above the 6% abv level for the first time in Tennessee, and we'd like to throw the question out to all of our loyal Yazooligans:

If it were your choice, what style of "high-alc" beer would you like to see us brew? Some ideas - a double IPA; a barleywine; a Trappist-style Belgian ale; an imperial oatmeal stout; a weizenbock; and the list could go on.

Leave us a comment below on what you would love to see, once we branch out into the higher-alcohol territory. Of course, we have our own ideas and recipes we've had waiting in the wings, but we would love your feedback. And no, the laws are not about to change - high alcohol beers will still be sold as liquor in TN.
Posted by Linus at 3:04 PM 35 comments:

Bryan Bergmann, the man responsible for the great beer selection at Whole Foods in Green Hills, asked me to pass along the following:

I’m going to put your core 3 beers, dollar off starting Wed. – can you still shoot out a blog post about it like we had talked about? And if you want to mention us tapping Hop Project - it will be back on Tap This Friday! We Went through 2 kegs in 10 days. We had 1 guy show up and get 5 growlers full! I’m ordering 2 more kegs today. "

So there you have it - $1 off all Yazoo six-packs for a month, plus Hop Project growler fills! All thanks to Bryan! If you run into him in Whole Foods one day, shake his hand! The latest in our Brewmaster's Reserve seriers will go on tap this evening at the Taproom only. You might recall that we let each one of our brewers come up with a recipe and brew a small batch of it for sale at our taproom only. This batch is the first one we've let Ivan, our newest and youngest brewer, loose in the brewhouse. Here, in his own words, is what transpired:

"Ivan's Firefly Ale - the name goes back to a recipe of amber ale that I brewed one spring evening. When I finished bottling the beer, I found a firefly left over, that must have flown into the kettle while I was boiling the wort. I thought the beer would be ruined, but it turned out to be one of the most delicious ales I had made! Firefly Amber ale is toasty in flavor with hints of dried fruit and generous amounts of US Golding hops. It's brewed in time to welcome the fireflies back in season in your backyard. Oh yeah, can you pick out the taste of the secret ingredient? Don't worry, no fireflies were harmed in the making of THIS beer."

It's quite tasty and makes us glad to have Ivan on the brewing team. Cheers, Linus
Posted by Linus at 7:43 AM 3 comments:

And the hops keep coming... for this rendition of our soon-to-be-world-famous Hop Project Ale, which will be number 12 in the series, we featured two relatively new varieties called Apollo and Bravo. Apollo, which we used in #3 (if I remember right), has a really pungent nose. almost garlicy. Bravo is much more mellow, kind of lemony. They are both bred from a Galena variety to be high-alpha (around 16%) but much more stable in storage. We bittered the beer with Apollo and Zeus in the first wort, then added some Galena, Goldings, and Bravo at 30 minutes, and Simcoe, Goldings, and Bravo at 5 minutes for aroma. Then we dryhopped it with some Goldings and Amarillo. The old calculations say it's over 100 IBUs, which makes us happy.

This batch was the one we planned on bottling, but the labels are taking their sweet time getting printed, and the kegs are zipping out of here at such a rate, now that we have it on tap at a few places other than the taproom, that we decided to keg out all of this batch. It's looking like the batch we first bottle will be lucky #13, which is fermenting away as we speak.

Come on by the taproom this weekend and give it a taste!
Posted by Linus at 1:20 PM 2 comments: 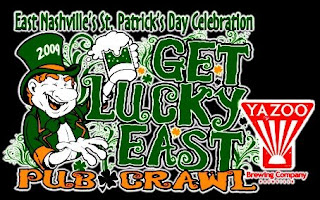 Where is the one place in Nashville on Saint Patrick's Day where your beer consumption will not make your pee turn green the next day? We're proud to be bringing you NO GREEN BEER at the 4th annual east Nashville pub crawl at Five Points. Our friends at Three Crow Bar, Beyond the Edge, Batter'd and Fried, and Red Door East will have specials all night on cold Yazoo brews, and there will be prizes and giveaways for all of you who remember to make the rounds to each location. Or you could be like me, and find a cozy corner to sit and watch the madness enfold around you. See you there!

http://www.eastnashvillepubcrawls.com/
Posted by Linus at 2:29 PM No comments: 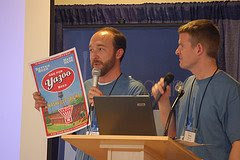 We sponsored the Yazoo beer garden this weekend at PodCamp Nashville, which was held at the Owen School of Management at Vanderbilt. Hopefully the good cold beer inspired the next wave of tech media entrepeneurs out there. Good to see our friend Justin Davis of Davis on Draft giving a talk on how to put together a podcast! www.davisondraft.com
Posted by Linus at 7:56 AM 1 comment:

Yazoo Brewing and Lightning 100 team up for Music City Mayhem!

Lightning 100 presents Music City Mayhem, featuring 32 local bands competing for the chance to perform for the Fantastic Four Showdown at Yazoo Brewing Company. Each day, there will be a new match up with Lightning listeners and artist's fans voting to decide who moves on. Voting will begin March 9th through April 1st . Each day we will play the two competing bands song on air. You can also hear clips on the Music City Madness page, where you can also vote, at Lightning100.com. On April 1st, listeners and fans will have determined The Fantastic Four.

Those four acts will play The Music City Madness Showdown at Yazoo Brewing Company on Friday, April 3rd where the attendants of this free show will vote on their favorite band via text. That's right, four bands out back behind the brewery! And rest assured, we've learned from the unexpectedly huge crowds at our last party, and we will have plenty of beer lines this time, so no one will have to wait long for a beer. And, we can almost guarantee that it will be warmer than in November!

Music City Mayhem results will be determined completely by fans and Lightning 100 listeners. Be sure to log on and vote each day beginning March 9th!You can find our more at Lightning 100's website,

There is a fun online poll at the Full Pint Dot Com website, to decide the people's choice of Best Down South Craft Brewery. Vote for us! It's also a pretty cool website, lots of content. Check it out,

Linus
Posted by Linus at 6:13 AM No comments: