If you can't make it to 12S Warmer, we will be tapping this 4 PM Sat Dec 1 @yazootaproom, with Dave and Don Sergio from Calfkiller! Swing by! 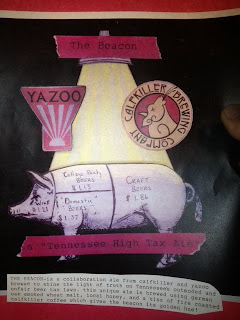 Introducing the first ever Yazoo-Calfkiller Brewing collaboration brew - "The Beacon"

We have never done a collaboration brew with another brewery before. But about three weeks ago, I traveled up to Sparta, TN, to brew a seven-barrel batch with the Sergios of Calfkiller Brewing. I had been impressed with Dave and Don and

their approach to beers and brewing since I met them a few years ago. I think we have a lot in common and I always enjoyed sharing a few beers with them. One thing we definitely have in common is our drive to change Tennessee's beer taxes, which unfairly tax craft brewers at a higher per-gallon rate than beers from the big brewers, and which have risen every year since 1954, to where TN's beer taxes are the highest in the country. So... we decided to put our frustrations into liquid form. Introducing... THE BEACON! Shining a light on a STYLE OF BEER UNIQUE TO TENNESSEE! THE "TENNESSEE HIGH TAX ALE" STYLE! Yes, only Tennessee can lay claim to this unique style of beer, where the taxes are raised to an almost unbelievable level of $37.00 per barrel. Other areas of the country can claim unique styles of beer, but only in TN are beer taxes taken to this level. We should be so proud!

Your first chance to taste this beer will be if you were lucky enough to have gotten one of the 1000 tickets to the 12S Winter Warmer beer festival this Sat, Dec 1. But there's more - we will be tapping kegs of this across Tennessee in the weeks to come. We will be brewing a second batch at Yazoo Brewing soon and plan on bottling it up in big 750 ml bottles, for distribution wherever the light needs to shine in Tennessee.

What is The Beacon, you might ask? Calfkiller and Yazoo brewed this beer with some German oak smoked wheat malt, local TN honey, and some in-house Calfkiller-roasted coffee. It's fermented with Calfkiller's house ale yeast and unfiltered. I am so happy with how it turned out! The nose is fresh, clean and slightly flowery. The smoked wheat shows up in the beginning of the first sip, followed by a herbal, earthy body but finishing dry and only slightly sweet.

Again, try it this weekend at the 12S Winter Warmer, and then if you missed it there, stay tuned for updates on where we tap the remaining kegs. Later in a few months we will brew another batch at Yazoo for bottling!

And, if for some reason, you don't feel that Tennessee's unique claim to beer fame should be our highest beer taxes in the United States, stop by our TN Craft Brewers Guild tent at the festival for more information on how you can help change that! We will also have details up soon, on the TN Craft Brewers Guild website http://www.tncraftbrewers.org/. Thanks,

Linus Hall
Yazoo Brewing
Posted by Linus at 6:51 AM 2 comments:

Seth modeling our new Yazoo hoodies. He did it to himself, I swear... 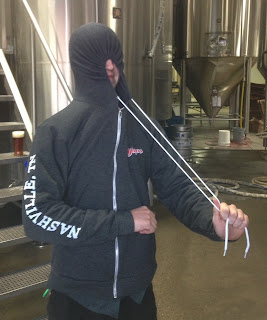 
I've long been a fan of the beers of a local brewer and friend, Brandon Jones.  I first brewed with him when he won a chance to brew a recipe of his on our old ten-barrel system.  We were trying to raise money for a brewer who was in a horrible welding accident in east Tennessee, and Brandon stepped up to the plate, brewing his "Brandon's Hop Blaster", with all the proceeds going to help the brewer and his family.  http://yazoobrew.blogspot.com/2009/10/mark-moynihan-fund.html

Since then, Brandon has really branched out into some wild and funky ales, full of sharp, tangy, and wild flavors.  After the happy accident that we turned into Fortuitous last year, he and I got to talking - what if we could partner up to bring some of the beers we both loved to a wider audience in Nashville and beyond?

So...  here's introducing a new series, titled the "Embrace the Funk" series.  Brandon and I will be working on a range of wild, soured ales that we will release in small batches as we go forward.  Your first chance to taste our creations will come at the 12th South Winter Warmer, with a beer we are calling "Wild Child".  Its base beer was our Sue, but it has been aging for a good while in a special barrel inoculated with a brett yeast strain and some dark sour cherries.  If you don't get to taste this beer at the festival, don't worry - we will be releasing some big bottles of it soon afterwards.

We've also started on a couple of other beers, but until they age we won't know how they are going to turn out.  One challenge has been making a small enough batch of wort to get the limited amounts of these exotic bugs going.  I want to say thanks to the guys at Corsair Artisan, who kindly let Brandon and I in last Saturday to brew up a ten-barrel batch of a special wort for a barrel-fermented project, which hopefully will be ready to bottle in about a year.


Well, I'm really excited about teaming up with Brandon on bringing some of these wild and funky ales to a bigger audience.  Through his website, www.embracethefunk.com, Brandon has been chronicling his journey down the wild path, along with some great interviews with brewers like Jean Van Roy of Cantillon, Tomme Arthur at Lost Abbey, Lauren Salazar at New Belgium, and Chad Yakobson of Crooked Stave.  We will be continuing that spirit with frequent updates of our progress (or failures!).