Update on our "bottled on" date stamp... 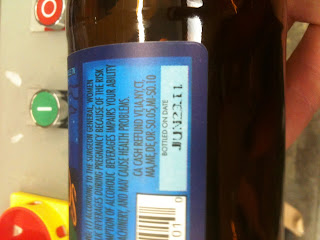 As you may have noticed, we are no longer notching the side of the labels on our bottled beer to indicate when the beer was packaged. Our new line came with the promise of a real date stamp on every label. Well, that little hot stamp coder is trickier to get set up right than it should be, and it doesn't always hit the same spot on the bottle. Plus, the stamp can be blurred at times. We have been working to dial it in, but the numbers can be hard to read at times. So, we are going to switch to using letters to indicate the month - like "JUN" for June, or "JUL" for July. So as you can see in the photo on the right, this batch of Dos Perros was bottled JUN29.11 or June 29, 2011.

With our new bottling line, we're confident that our beer will hold up well for at least three months, possibly longer. But you can always see how fresh the beer is by checking the label, or by checking the top of the case box if we have a case display out. I personally wish all beers were date-coded, so I could judge for myself how fresh it was. Some beers are fine with a little age on them - big, bottled-conditioned Belgian beers for example - while some go downhill quickly - like hoppy IPAs. "Best before" dates are a step in the right direction, but you don't know if the brewer is using a three month window, a six month window, a year...
Posted by Linus at 8:14 AM 3 comments:

There are still honest people out there...

Thank you, whoever you are! 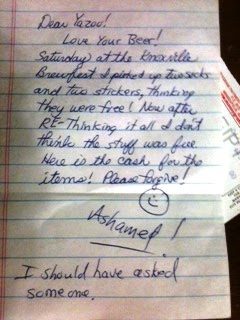 You have affirmed my faith in humanity, at least for a while. Nice to find your letter buried in the bills in our mailbox...
Posted by Linus at 8:09 AM 1 comment: 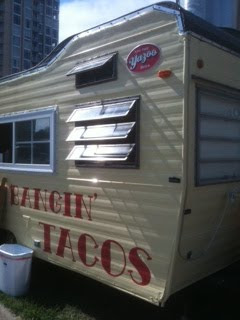 ...is now using Dos Perros to marinate their pork! Get you some! Here till 8 PM.
Posted by Linus at 2:27 PM No comments: 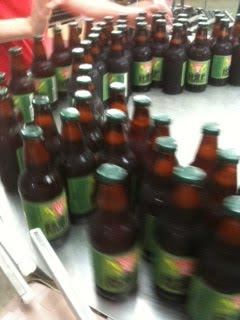 Interesting story on the new owners of Pabst 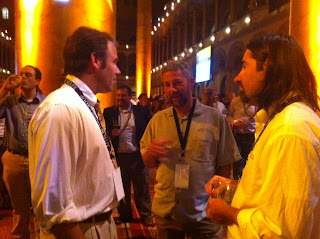 What a great event! 72 breweries and 144 beers from all over the US. Our Rye Saison and Sue were big hits. I really enjoyed meeting people from all over, especially the guys from Evolution Brewing, Buckbean, Troegs, Capt Lawrence, and many more. That's me, Mark Henderson from Lazy Magnolia, and a guy who is thinking about opening a brewery in TN.

Sorry, couldn't resist. That is of course Ken Grossman, of Sierra Nevada, and we talked a good bit about the recent TN high alc law change. He says they were unaware of the proposed pilot project idea until they started getting hate mail about it, and basically told the Senator sponsoring the bill that they were not interested in coming to TN unless all TN brewers were included. I believe that is the way it went down, after talking to Ken and reading this:
http://www.willcheek.blogspot.com/

Ken is a pioneer in our industry and a cool guy. I hope they do locate another brewery in TN.
Posted by Linus at 6:35 AM 1 comment:

Yes, there is usually a great mobile food truck at Yazoo...

I guess I haven't mentioned it here before... but yes, we have been inviting some of the great mobile food vendors down for taproom hours. Not everyone is on twitter, but if you sign up and follow just one person, make it @yazoobrewtaproom.

Brandi keeps it updated with what mobile truck is coming down every day we are open. Lately, it's been great food from the Latin Wagon, the Grilled Cheeserie, Banging Tacos, Pizza Buds, and more. And like I mentioned in my last post, Eat Street will be filming Saturday as part of their feature on Nashville mobile food trucks! Come on down!
Posted by Linus at 1:41 PM 2 comments:

Here's what's happening at and around Yazoo this weekend:

This festival has expanded to include a bona-fide beer garden on the lawn in front of the Metro Courthouse. Some of Nashville's local brews will be poured, including Yazoo, Gerst, Boscos, Big River, Jubilee, and the one from the new Mayday Brewery in Murfreesboro. There is a preview party for the beer garden Friday from 5-8 PM. The Taste of Music City starts at 11 AM on Saturday, with Deaderick St closed so you can wander up and down, tasting the best food from Nashville's restaurants. Stop by and say hi!

Eat Street travels the country filming the local street food vendor scene. They have heard a lot about Nashville's recent explosion of mobile food vendors, and are filming around Nashville this weekend. Come down to Yazoo starting at 2 PM if you want to be a part of it! Riffstrucks will be here! http://riffstruck.com/

This should be a hopping good time down in Birmingham, as Free the Hops in AL just got a bill passed that will allow brewers to have taprooms. It's held at the cool old foundry Sloss Furnaces, a great place for a festival.

Linus and Lila will be traveling up to D.C. this weekend to represent Yazoo at this national celebration of craft beer, featuring over 70 craft brewers and their beers, paired up with some of the best food D.C. has to offer.
Posted by Linus at 7:59 AM 1 comment: