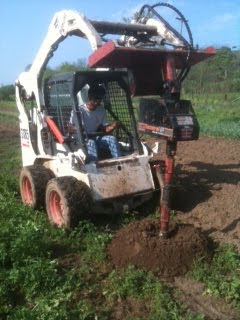 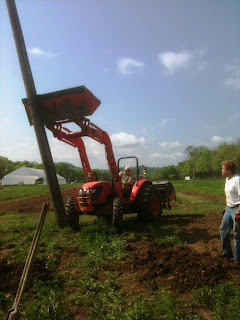 We're working with Sulphur Creek Farm again, planting more hops out at Bells Bend. Last year they planted Cascade hops, and we harvested enough for a small batch of Preservation Ale. This year we're putting up a much larger hop trellis and planting some Cascade, Centennial, and a mystery hop - one that a local farmer has had growing on his property for years, but has never been brewed with. It grows well in this climate, so we hope it turns out to be a great hop! 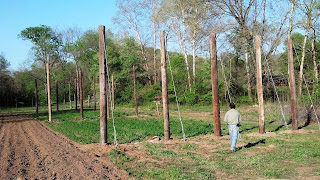 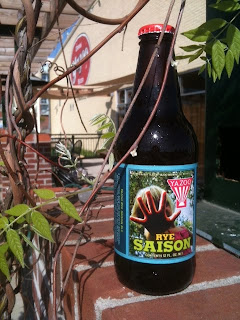 We're bottling our spring seasonal today, our Rye Saison. First brewed to celebrate our five year anniversary in 2008, it proved so popular that we decided to bring it back every year in the spring. And you couldn't ask for better weather to have one of these out on your deck (hopefully in your new Speigelau glass!) If you can't wait to get it in your local store, we'll have it at the brewery starting Wednesday. 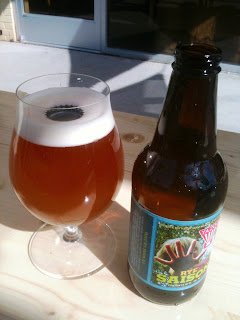 Look at the head on this beer! Rye is tough to work with in brewing, because of the dense, sticky mash it makes - especially in a beer with this much rye in the grain bill. But the brilliant dense white head and fruity, spicy flavor this grain brings makes it worth it. (That's a bottle cap floating on top!)

Last week, the Nashville Business Journal reported that beer taxes in TN were some of the lowest in the country, based on data provided by the Tax Foundation in Washington, D.C. However, Tennessee gets most of its beer tax revenue from a 17% wholesale tax. If you look at all the taxes the state collects on the sale of beer, TN has the highest overall taxes in the country. I emailed both the Nashville Business Journal and the Tax Foundation, asking them to clarify their stance. The Journal posted a clarification the next day, but I didn't hear back from the Tax Foundation. But Politifact Tennessee picked up on the claim made by the Tax Foundation and reported their assessment of its truth here: http://www.politifact.com/tennessee/statements/2012/mar/20/tax-foundation/tax-foundation-map-shows-tennessee-has-low-beer-ex/ 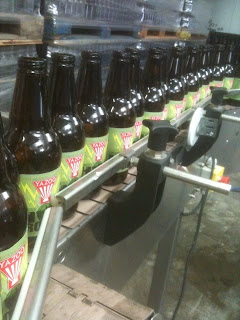 Long live Hop Project #63 - but it's time to move on. We will be getting some more Kiwi hops in later this year, but for #64 we wanted to get a little taste of the old country. We brought in three of our favorite English hops - Challenger, Progress, and Target - and used them throughout the batch.

The result? Well, the bitterness is very mellow and clean. It has a great spicy aroma, with hints of candy and orange marmalade. I really like it, and it is a great change of gears from #63. After a couple of batches of #64, enough to get it distributed out to all of our distribution area, we'll be getting some New Zealand hops in for #65. 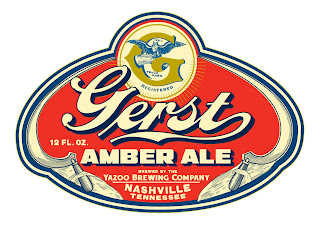 Good news! After several iterations, everyone involved is happy with the label and six-pack art design, and the ATF signed off on the label approval. We've got the labels and six-packs being printed in the next week! It generally takes 3-4 weeks to get all that done, and then you should start to see bottles of Gerst in stores! Here is a sneak peak at the label:
Posted by Linus at 11:55 AM 4 comments:

Another cute picture of a lab... 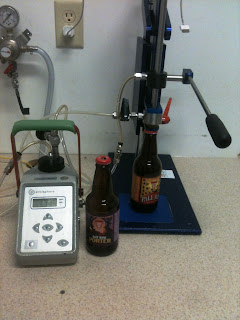 This puppy has really been helping us to improve the quality and shelf-life of our beers over the past year. It's a dissolved oxygen meter. You place a recently bottled beer on the piercer, punch a tube through the bottle cap, and run the beer through the meter. You can also take the meter out into the brewery and test beer at different points in the process.

Why is it important to control dissolved oxygen? Well, in the first stages of fermentation, the yeast needs a certain level of oxygen in the wort to grow and reproduce properly. Once the beer is done fermenting, the oxygen levels will be very low, and you want to keep it that way. Oxygen will react with the great natural flavor compounds in beer and over time will create those old, stale cardboard flavors you taste in beer that is past its prime.

The DO meter has really helped us dial in our process to fight oxygen pickup. Over the past few months we've improved and modified our filtering process, changed our tank cleaning procedures, and fine-tuned the new Comac filler. We've been able to get our dissolved oxygen levels in the final bottled beer down to the same levels the "big" guys can achieve. All in all, it will mean our bottled beers will taste brewery fresh for much longer. As always, you can tell when we bottled any of our beers by checking the "bottled on" date stamped on the right side of the label, and the date stamped on the case box. Cheers!
Posted by Linus at 5:47 AM No comments:

Pics of the new 120 bbl fermenters 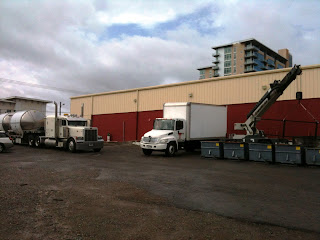 Well, the new 120 bbl fermenters arrived last Wednesday. I decided to rent a carry-deck crane this time instead of trying to use two forklifts. Yes, there are companies that will rent you a crane! I guess they assume that you must know how to use it, if you are renting one. After practicing for a few minutes, we were ready to unload the truck. 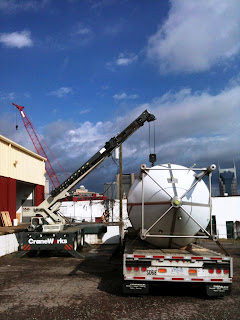 Unloading the truck was a breeze with the crane. We just ran a sling to the top and to the legs, and hoisted the tank up onto our loading dock. 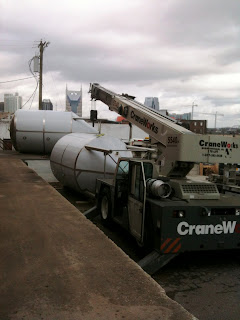 Then, once the tanks were off and the truck was on its way, the hard part began - getting the tanks inside the building and stood up in position. We had our forklift pick up the front (top) of the tank and the crane picked up the legs, and then we slowly drove up the ramp and into the building, stopping every few feet to readjust the boom on the crane to keep from smashing the dock door in. 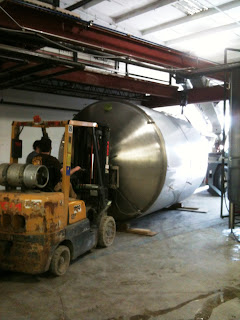 Now for the tricky part. These 120 bbl tanks are only a few feet shorter than the roof in the brewery - not enough space above them to pick straight up to stand the tanks up. We couldn't use just our forklift to stand them up - its mast only goes up to 16'. We had to position the crane inside the building and boom way out over the tank. Our forklift was on the other side of the tank. The forklift picked the tank up as high as the mast on the forklift could go, and then we hooked the crane to the other side of the tank and started pulling back. The tank gently leaned over onto its feet, held back by the forklift. 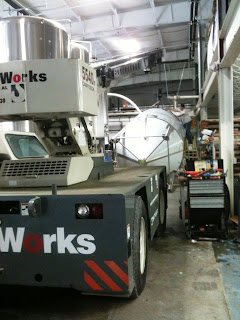 Once one of the tanks was up, we repeated the whole procedure again for the second tank. Only now, with a lot less space to work in! 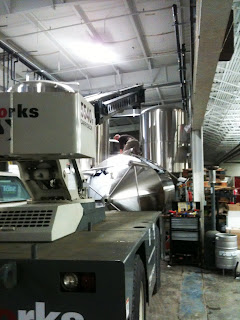 There they both are! Beautiful ain't it! Once all the piping and electrical is done, these babies will be filled and will start happily fermenting away. Which beer do you think we should start off with? I'm thinking Hop Project #64! 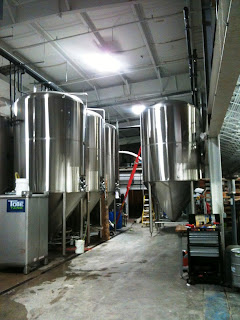