Price of everything going through the roof

Wow. Just got through digesting all of the price increases on hops, barley, and glass bottles. Our hop prices have gone up 300% on some varieties this year, and we're one of the lucky breweries who will be able to actually get some. Barley prices have gone up anywhere from 30% for our pale malt to 70% for our darker malts. Glass prices just went up another 7% this month. All in all, our cost to make beer looks like it will go up 35-40% this month. Fantastic.

I wish that we could absorb this cost and not have to pass it on to our customers, but who the heck can do that when your cost to produce goes up 35-40%? We'll probably hold off for another month, but get ready, the price of all of your favorite craft beers, Yazoo included, is about to go up. Sorry.

Linus
Posted by Linus at 7:14 AM No comments:

Labels: price of beer going up 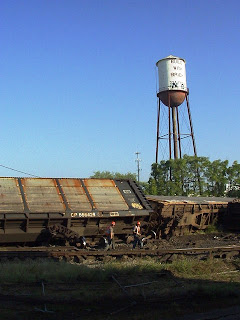 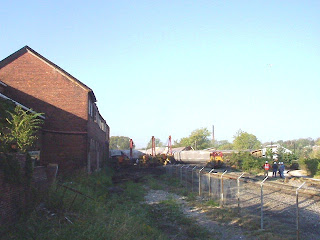 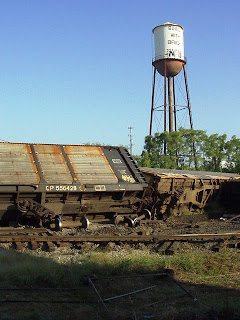 Wow, got to work today and last night there was a train derailment behind the Marathon building. Train cars filled with new Nissan trucks and cars over on their sides. It doesn't look like it did much damage to the building, but what a mess! The police said it was a malfunction of a siding switch that caused the train to jump the track. 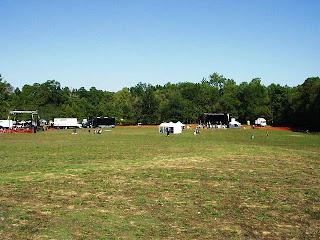 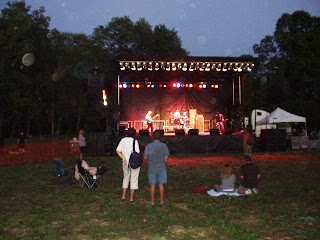 We sponsored the beer for this Southern Rock festival put on by Joie Todd of the Les Honkies More Tonkies. The music was great, the location was fairly good, good food, cool vendors, perfect weather. I wish more people had come out. Mabye next year. 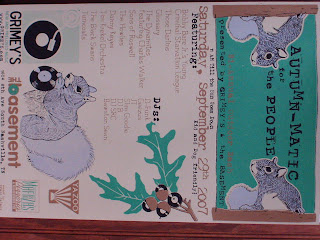 We have a super busy weekend coming up, but at least I have enough help to cover it nowadays. Friday night is the Taste of Nashville benefit out at the Belle Meade Plantation, with Holly as your guest server at the Yazoo table. Saturday is Grimey's Fall Bash, out behind the Basement and Grimey's Records on 8th Ave South. The Yazoo van will be there pouring beer all day from 11 AM until late. And finally, we're a beer sponsor of Muckelwain, out in Pinewood, TN, on Friday and Saturday nights. The BIG YAZOO TRUCK will be there, with me driving about 20 kegs out for the event.

Here's the Grimey's lineup for Saturday. Swing by and then come out to Mucklewain that night!. http://www.muckelwain.com/

Back in the groove, finally! 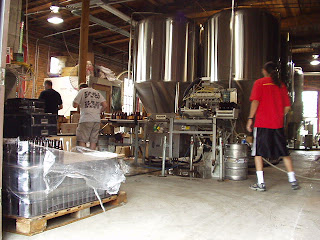 Well, after several weeks of construction and trying to get all the new tanks plumbed and wired, we're back in full swing. We made a lot of changes this month - adding three new 40 bbl fermenters, moving the bottling line, and switching to using bulk glass instead of having all of our cases pre-packed for us. It's a little more challenging to have to assemble all of the cases in-house, but I think the money we will save will be worth it.

That's Brian running the bottler on the right, Colin packing off the bottles into cases, and Jason assembling the cases and carriers. 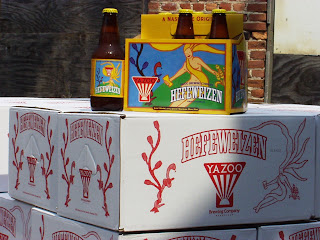 Among the liquid artwork was Yazoo Hefeweizen, Jack Wall's favorite brew of the evening. Jack, bar manager at Old Venice, described it as "full-bodied beer, not too sweet, not too sour."
Posted by Linus at 3:21 PM No comments:

Tanks all stood up 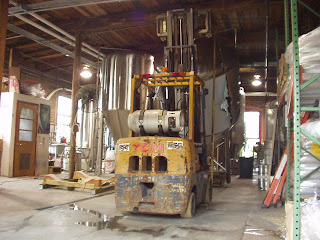 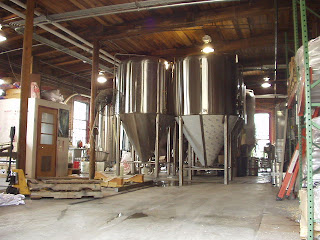 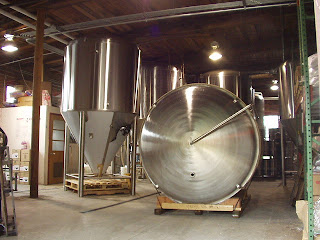 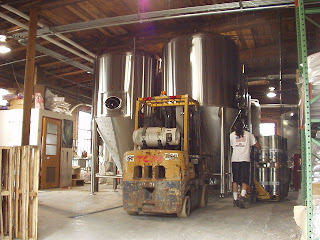 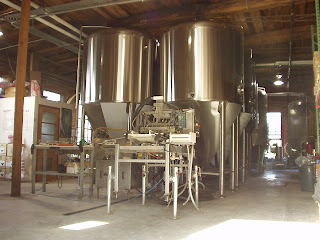 We spent the day getting all of the new tanks into position so that we can reassemble the bottling line and get the new tanks all plumbed in. There is only one spot left in the brewery that has enough overhead clearance to get one of these big boys stood up, so it was kind of like that Cracker Barrel game where you move all the pegs around, except we were trying to figure out how to ADD more tanks. Here is a set of pics of how it all went up... 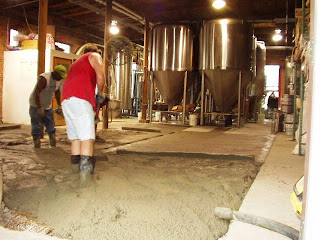 We spent the week before Labor Day ripping up old concrete in the brewery and pouring a new slab with good drains, in the back half of the brewery. Why? Well, on Sept 10 we have three brand new 40 bbl fermenters (1200 gallons each) arriving, and the old concrete just wasn't going to cut it. I knew from my first go-around with the old concrete at Marathon that it was only about three inches thick, with no rebar at all, so the weight of the new tanks full of beer would have been too much.

Quinn, Brian, and I spent the week getting all the old concrete jackhammered up and spreading new gravel fill. We couldn't brew while all the dust and dirt was in the air, so I decided to put those guys to work getting ready for the new concrete to be poured. I know that by the end of the week they were ready to get back to normal brewing!

I got Jack White of White's Concrete to come and pour the concrete - 8 yards and it had to be pumped into the building. Jack is not cheap, but he knew what he was doing, and the new concrete looks great. More important, it's strong and it now drains properly to the new drains we installed as well.
Only brewers get excited about new concrete floors!

Hi, Linus Hall here, owner of Yazoo Brewing in Nashville, TN. I've decided to start putting a lot of our news and information here at our blog, instead of on our regular email blasts. So if you're interested, check out this blog often. If you just want to drink good beer, and not wonder about how it was made or what it took to get it to your glass, you can do that too!
Posted by Linus at 8:24 AM No comments: