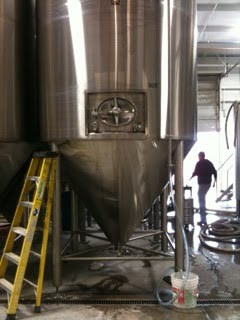 This is one of my favorite dishes to make. It's easy and simple enough that even a novice cook like me can make it, and best of all, it involves beer! It's a classic Belgian meal.

Chop up the scallions into fairly large pieces. Fry them in butter until they begin to turn clear. Remove the scallions from heat, to be used later.

Cut the pork into pieces about two-three inches diameter. They will shrink to about half this size by the end. Get a cast-iron skillet very hot, and pan-sear the pork, getting a nice dark sear on both sides but not cooking the meat much. You'll probably have to do this in two separate batches.

Now just cover the seared pork with the beer (should be about 1 to 1-1/2 bottles), and add the bay leaves, thyme, and rosemary, and the cooked scallions. Simmer for two-three hours until the pork is done and fork tender.

The beer should have cooked down to about half the volume you started with. Remove the pork to a serving dish. Add the cherry preserves and the dijon mustard to the remaining liquid in the pot and simmer the mixture at low heat for about 5 minutes, making a great cherry sauce. Cover the pork with the sauce on the serving dish and serve.

Goes great with home-made french fries! And of course, you want to pair the meal with the beer you used in cooking - again, Yazoo SUE is perfect for this dish, as the cherry notes in the beer pair well with the cherry preserves.
Posted by Linus at 6:48 AM 1 comment:

The Great Can Debate

In a month, Lila and I will travel to Bergamo, Italy, to inspect our new COMAC bottling line before it ships here. The new line will help us double our current capacity for bottling, and will give us a much better bottled beer, with a longer shelf life.

I guess that kind of gives away our decision between switching to cans, or staying in bottles!

It was a very hard decision. Canned craft beer is one of the hottest trends right now, and we know our customers would love to have the option of getting their Yazoo in cans. However, we chose to upgrade to better, faster bottling line, rather than a new canning line, for the following reasons:

1. First, you guys spoke! Only 32% of the people who voted in our poll were in favor of us switching to cans completely. At our current level, we can't afford to invest in both a new canning line and a new bottling line - it had to be one or the other. But there seemed to be a lot of interest in having some of our beers available in cans, as long as they were always available in bottles as well. So, perhaps after we get our new bottling line up and running, we'll start looking at canning some of our beers as well.

2. BPA. I didn't even know what this was until I started doing more research, and while I am not one to pay attention to every health scare issue, this is one I began to think about. Apparently BPA, which is a chemical in the lining that is sprayed into each can to line the can, can act like a synthetic hormone in humans. Some doctors and scientists believe BPA can leach from the linings of cans, and build up in the bloodstream of young children. There it might act like a synthetic form of estrogen, causing young girls to hit puberty much earlier than normal. I don't know - the evidence is inconclusive. But I do know that there is building political pressure to find an alternative to BPA in can linings - in fact, just this week, Canada declared BPA to be a toxic substance to humans, which will lead to bans in soda and beer cans. I'd rather wait and see how it all shakes out before investing in a new canning line. Here is a link to the story:

3. Canning technology for microbrewers - There are really only one or two companies that make canning lines suited for small breweries. While the filling head designs of the leading company seem to be very good, the seaming technology seems to be problematic. In talks with other brewers and in research online, I have heard many stories of problems with the can seamers on small canning lines, with pinhole leaks developing, sometimes weeks after canning (especially if pallets of cans are stacked on top of each other, like at many distributors). After years of finicky issues with our current bottler and labeller, the last thing I want to do is introduce a new headache.

4. Economics - we have great relationships with our bottle suppliers, and over the past few years have gotten great payment terms. Switching to cans would mean paying, upfront before we even get the first beer into a can, about $45,000 total for the first truckload of cans plus all the deposit fees for pallets, liners, etc. That's a huge hit in cash flow for any business, but especially small breweries like us.

We know bottles. We like bottles. I'd love to get some of our beer into cans at some point (hopefully sooner than later). But for right now we are staying with the good old Heritage bottle for our new line.

Hop Project #43 out, look for it in middle TN and MS 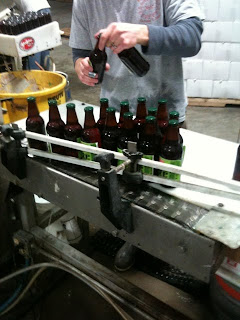 Bottled third week of Jan. For this beauty we used Cascade, Magnum, and Nugget for bittering, Amarillo and Tettnanger at 30 min, and Cascade and Nugget at five min. Dryhopped with Cascade and Amarillo.

I really like this one. We had a rough time filtering it ( too many hops!) and only packaged about 220 cases, so get some quick! We shipped it out to our middle TN and MS distributors this past Thursday, Jan 20. 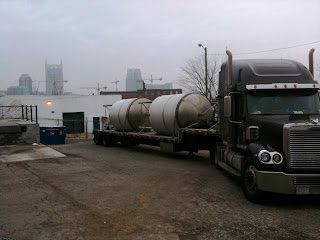 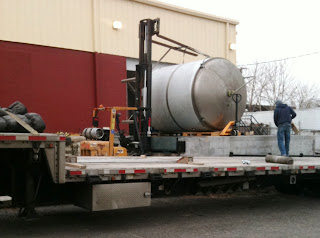 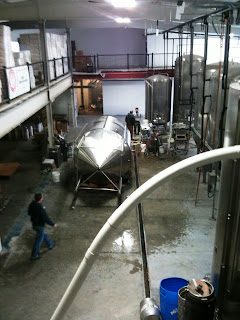 We are installing two new 80 bbl (~2500 gallons) fermenters today! No matter how many times we've done it (and it seems like a lot, since we had to move all of our tanks over from the old brewery), it still is exciting to unwrap a shiny new stainless tank, stand it up, hook up all the plumbing and wiring, and to brew the first batch into it. These two new tanks will bump up our capacity by about 25% - which is good, because we hit capacity again towards the end of last year. 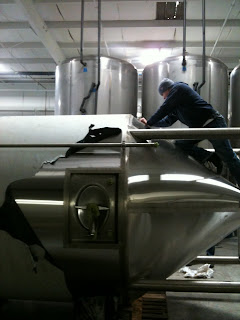 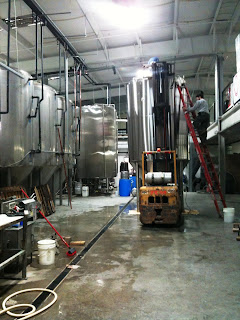 All stood up, cleaning a couple thousand miles worth of road grime off, from the long trip from around Vancouver. Time for an Onward Stout! 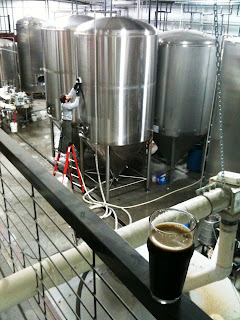 Hop Project now in Vicksburg, MS Kroger! ( thanks for the pic Mom) 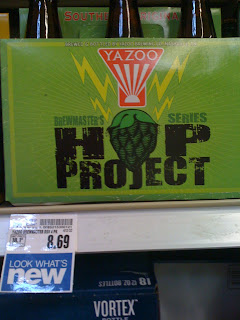 It's going to be a great day! More Sue rolling down the line 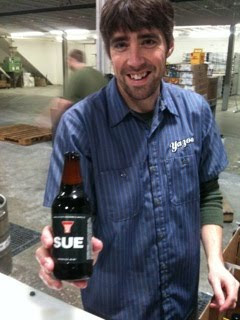 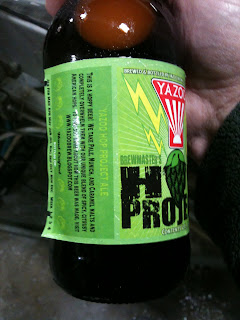 Wow, what a year! As I look back, it's hard to believe it all happened in just 365 days. It was one of the most difficult and rewarding years we have had in our seven years of business. Thank you to all of you! Here's to a great 2011!
Posted by Linus at 7:35 AM No comments: