YAZOO WILL BE CLOSED FOR THE 4TH OF JULY

... so come on down and see us at the Hot Chicken Festival, in East Park over in east Nashville. It runs from 11-3 PM, with hot chicken from Nashville's best hot chicken joints and a cold Yazoo beer. We're going to have a bigger beer garden tent this year, and hopefully the beer lines will move faster with a year under our belt.

Hop Project #16 out in bottles and draft!

Our third bottled version of Hop Project should be out in stores in the next few weeks. You can identify this one as being bottled on the 4th week in June (it also has the date marked on the outside of the case boxes if you see a display).

You might think, man, it must be getting hard for the Yazoo brewers to come up with new recipes and hops to try, after 16 versions. Not so! There's always a new hop or a new way of using it that we have been wanting to try.

Hop Project #16 is hopped with Galena, Zeus, and Columbus at first wort, Goldings and Ahtanum at 30 minutes left for flavor, and with Perle and Ahtanum at 5 minutes left for aroma. We use Perle a good bit in our beers, but always as a bittering hop, never as an aroma or flavor hop. So for this one, we also dry-hopped it with a combination of Perle and Ahtanum. Finally, we wanted to experiment with the mineral profile of the beer, which changes how the bitterness is perceived on your tongue. We ususally use add gypsum to the water for hoppy beers, which tends to sharpen the hop bitterness. But this time we switched to calcium chloride, which rounds out the malt flavors a little more.

I like it. It has the juicy citrusy bitterness you would expect from Galena, Zeus, and Columbus, but the Perle on the finish seems to give it a little minty edge. The bitterness doesn't hit you over the head at first, but lingers like a good friend who doesn't want to go home yet.

Cantina Laredo is asking for your input on their beer selection

The Gulch's newest restaurant, Cantina Laredo, has a fairly standard array of draft beers, set by the corporate office. Neil, our sales manager, has been trying to get a Yazoo handle in there since they opened. When he met with Mike, the manager there, Mike suggested that if his customers would email him asking for Yazoo there, he would have some ammunition to take to corporate. So how about it? If you want Yazoo and other craft beers on tap there (they have excellent food, by the way), email Mike at nashville@cantinalaredo.com.
Posted by Linus at 5:20 PM 1 comment:

Come out to the Taste of Music City this Saturday, Gateway Bridge 5-9 PM 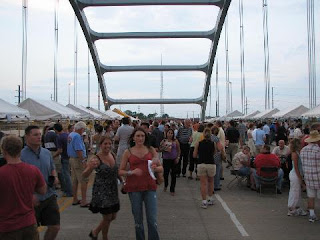 Explore the foods from 50 local restuarants as you watch the sunset from the Gateway Vietnam Veterans Bridge in downtown Nashville this Saturday from 5-9 PM. The organizers are doing a lot of things differently this year. There will be one beer garden, hosted by Yazoo, pouring all your favorites, plus our new Summer Ale. The wine garden will be hosted by Arrington Vineyards, and Jack Daniels will wet your whistle with their Velvet Elvis.
http://www.tasteofmusiccity.com/home.html 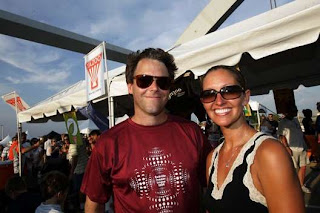 Recap: Another one in the books! Thanks to Candace Price for putting on a great party!

Make Plans - Hot Chicken Festival July 4th (because the Taproom will be closed!) 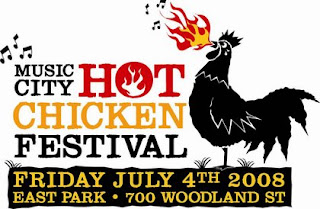 1. It's quickly becoming a Nashville tradition
2. The first 500 people will be treated to free samples
3. A bigger Yazoo beer garden
4. A new Yazoo beer - Summer Ale - sure to quench the fire
5. The festival will go one hour longer this year
6. Get to try hot chicken from Nashville's famous and Nashville's up-and-coming
7. Very kid friendly - just don't let them rub their eyes
8. Fireworks inside, then later fireworks outside!
9. Proceeds go to Friends of Shelby Park
10. and last, but not least, the Yazoo taproom will be closed for the 4th of July

So come on down and see us at the Hot Chicken Festival, July 4th at East Park, on Woodland Street in east Nashville.

Join Mayor Karl Dean, NES, and TVA as the Sounds take on our rivals from down the road, the Memphis Redbirds, for the 2nd Annual Go Green Night. For our part of this event, we decided to sign up for the Green Power Switch. As part of this program, you agree to purchase blocks of power from your local electic utility that were produced from "green" sources, like wind, solar, or methane generated from landfills. To promote the Green Power Switch plan, we've taken two steps:

One, we will be debuting our new Summer Ale at the Sounds stadium this Saturday night. It's brewed with 100% organic malts, and now that we are members of the Green Power Switch, it's the first true "GREEN" beer brewed in Tennessee! No fake green dye, this beer is light and clean, with a nice crisp finish from the Saaz hops used. Look for it at the Yazoo booth in the breezeway behind 1st base.

YAZOO AT THE MUSIC CITY ZONE, CMA FESTIVAL THIS WEEKEND

Looking to escape the crowds down on Broadway, but want something fun to do this weekend? Come by the new Music City Zone during the CMA Festival this weekend! You'll be able to catch local acts like the Gabe Dixon Band and Jeremy Lister, have a cold Yazoo at our tent, grab a burger at the Backyard Burger tent, let the kids play in the fountains, etc. It's all taking place on the Public Plaza in front of the newly renovated Courthouse, at the top of 2nd Avenue. Best of all, the music and fun is totally free. Just bring some cash for the beer and food! It's happening Thur-Sat from noon - 6 PM. See you there! For more info and the full music lineup, visit:

http://www.visitmusiccity.com/visitors/cmafest
Posted by Linus at 9:45 AM No comments:

For the first time Yazoo will be served at Bonnaroo in the Broo'ers Tent. I think this will be the first Tennessee-brewed beer ever poured at Bonnaroo! Come by and say hi to Neil, who will be pouring three beers all weekend. Any requests? Email neil@yazoobrew.com. Stay hydrated! (Beer is 90% water after all).
Posted by Linus at 9:41 AM No comments:

We're always trying to figure out ways to lower our impact on our environment at Yazoo. We capture all of our cooling water for hot water for the next batch; our spent grain goes to a local cattle farmer, and to Provence for their Yazoo bread; we recycle our cardboard down at Smurfitt-Stone (even though they quit paying anything for scrap cardboard!); and so on. One of the things that has always bugged me was the fact that after they are purchased, our six-pack carriers go straight into either the trash or recycling, when they could be used again.

The carriers need to be in good shape, and ready to be reused again. That is, no tears, no water damage, no cigarette butts, etc.

Hey, free beer and swag, just for doing something you hopefully do already (drink Yazoo)! And you'll feel so much better knowing that you're helping the environment. Save your 6-pack carriers, bring them down to the taproom during normal taproom hours, and enjoy a pint or a t-shirt on us!
Posted by Linus at 3:19 PM 6 comments: