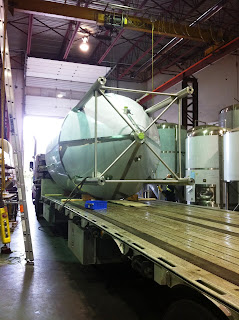 It's starting to get a little tight in the brewery again, kind of like it was at Marathon before we ran out of room. I'll post some more pics of the tanks and our attempts to stand them up later this week.

Here's a pic from Friday of the tanks being loaded at Newlands Systems in Vancouver. They always look smaller on their sides than once you stand them up, but they are 19' tall and about 9' in diameter.
Posted by Linus at 10:08 AM

Does that mean you'll have capacity to get back to brewing the ESB?