OK, back to work!

First off, if you missed out on Embrace the Funk Fest last weekend, well... you definitely missed out.  But we will have a few of the beers that we debuted there on tap at our Yazoo taproom over the next few months, as well as a few others that we haven't released yet. 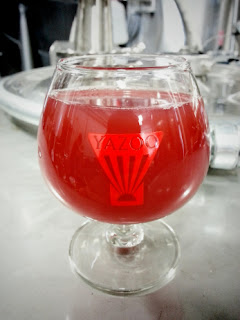 "Rufus" - on tap now - a sour red ale fermented with two strains of brett, blackberries, and blackcurrants, and then blended with "Oscar", New Belgium Brewing's sour base beer for blends like their "La Folie".  We were honored when New Belgium agreed to do a sour beer blend with us, and we think the result is fantastic.  It was a big hit at Embrace the Funk Fest, and here's your chance to have it again, starting today, May 9, at 4 PM at the Yazoo taproom.  Due to the limited supply of this beer, and our desire to spread the funk to as many people as possible, we will only serve pints of this beer, no growlers to go.

"Wild Child" - on tap after Rufus is done (in a few weeks?) - a blend of Sue and Dos Perros wort, fermented with a special blend of brett and souring bacteria, and aged with sour cherries in a barrel we sourced from Russian River.  This one is dark, fruity, funky and sour.

"Brett Rye Saison" - still in the Janky Tank (our special sour beer fermenter), but will be kegged next week, going on after Wild Child is gone - our Rye Saison seasonal fermented with two additional brett strains.

"Berliner Weisse" - an intensely sour wheat ale fermented with the addition of lactobacillus and brett.   Will be available after the Brett Rye Saison is done.

Well, now that you can plan our your next few months around sour beers, we'll see you down at the taproom!  Cheers!

Are Yazoo snifters available for purchase?

The Brett Rye Saison was amazing. Actually all of the sours have been amazing! Please don't stop! How 'bout some growler fills of these amazing beers!!!