Beer line? What we are doing about beer lines at Nashville's Hot Chicken Festival this year...

We hate long beer lines as much as anyone else.  Last year, the surging popularity of Nashville's Hot Chicken Festival caught everyone involved by surprise.  Attendance at the festival had been growing at a steady rate every year, and the Hot Chicken Planning Committee had anticipated a crowd of about 5,000 people.

To accommodate that many folks, we planned to split the beer pouring locations into two spots, on opposite ends of the festival grounds.  And for the first year, the festival's beer permit covered the entire grounds, not just the Beer Tent.  So people would be able to move around with their "Free Range Beer". 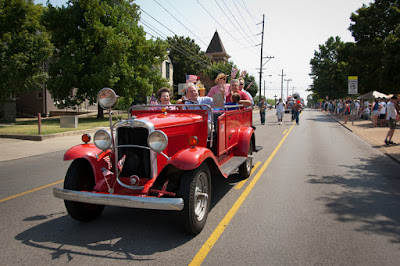 The day dawned, with perfect weather for the festival.  After less than an hour in, the crowd had grown larger than we'd ever seen at the Hot Chicken Fest.  Metro Police later estimated the crowd to be around 15,000 people.  We opened all the taps at both of our beer stations and didn't close them for the rest of the day, filling one cup after another after another.  But it wasn't fast enough, and the beer lines grew longer and longer.

This year, we are making some changes that we think will greatly enhance the experience.  We've partnered with the organizers of Germantown's Octoberfest to use a new beer pouring technology that they successfully launched last year at their festival.  It's called "Bottoms Up" and for a beer geek/engineer like me, it's almost magic.  The cup has a hole in the bottom, covered with a magnetic disk.  The beer flows into the cup from the bottom, and the cup is filled in about four seconds.  It can empty a keg in record time, with minimal foam.  Check out this video:  https://www.youtube.com/watch?v=Xmnp3aVGyGc.

We will have TWO separate locations again, each with a Bottoms Up 4-tap dispenser.  One person operating a Bottoms Up station can keep eight people busy just handing out the beers.  It's lightning fast, and after testing the units out at several different events, we are confident that the beer lines will be minimal this year.  We know the long beer lines were a hassle last year, and we want you to know that we listened to your comments, and have come up with a great plan for this year's Hot Chicken Festival.  It's grown to be a Nashville Fourth of July tradition, and we can't wait to see you again on the 4th!

You have a nice travel blog. Great pictures, and your writing with it goes very well. Thank you. yatra coupon

This is one of the best beer I have tasted in 20 years...

This is a great venue. I was here for a party and there was so much food and it was all done so well! The decor and food both were amazing. Personally, I think the space is laid out really well and the size of the event space Chicago keeps pulling great parties.

I simply had to thank you very much once again. I�m not certain what I could possibly have followed in the absence of the type of ideas contributed by you concerning my theme. It actually was a frightful difficulty for me, nevertheless finding out the very professional manner you resolved the issue forced me to jump over joy. Now i�m thankful for your work and even hope that you are aware of a great job you�re doing training people today thru your blog post. I know that you have never got to know any of us. blog here