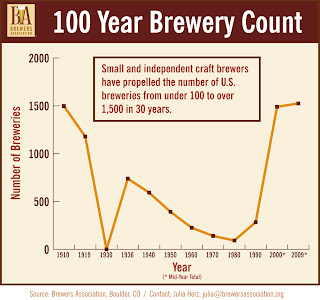 The Brewer's Association just released mid-year numbers, and the results are encouraging for the over 1500 small brewers in the country. Dollar sales of the craft beer segment were up 9%, and volume was up 5%. All this in a difficult economy and with the big three - oops, sorry, it's the big two now - suffering declining market share. I think it is a testament to how beer drinker's tastes are changing.

Now, after close to 100 years, and the great experiments of Prohibition, and even worse, Light Beer, the U.S. is host to over 1500 breweries once again.
Posted by Linus at 10:49 AM