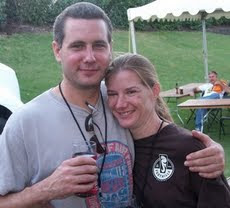 Brewers are a tight-knit community. One of the things that convinced me to become one was how open and supportive most brewers were that I met along my path to opening Yazoo. So when the comunity of brewers in Nashville, homebrewers and professionals alike, heard what had happened to a fellow brewer in Knoxville, we knew we had to do something to help him and his family.
Mark Moynihan, an assistant brewer at Calhoun's Brewery in Knoxville, was critically burned in a welding accident inside a tank at the brewery. He was taken to Vanderbilt Hospital's Burn Unit with third-degree burns over 98% of his body. His doctor gave him a 2-3% chance of surviving. During a monthly brewer's meeting, we decided to auction off the right to brew a homebrew recipe on Yazoo's system, and to put the beer on tap in our taproom, with all the proceeds going to Mark for his medical bills. Brandon Jones, a top-notch local homebrewer and the news director at Channel 5 news, bid the most for the chance to brew his award-winning "Hop Blaster" ale at Yazoo. Unfortunately, Mark passed away on June 23rd after 74 days of fighting. We went ahead with the brew with the hopes that the money raised would help support Mark's wife, Kim.
Please join us this Friday Sept 4th as we tap Brandon's Hop Blaster, with all the proceeds going to the fund for Mark. For more info see http://markmarathon.blogspot.com/

This is a fantastic beer. I highly recommend stopping by and grabbing a pint. It's for a good cause, too.

It's great to see such a worthy cause, can't wait to try it.

I bought a growler from Yazoo last night just so I could take some home. Very good beer guys! I would like to see this one at Yazoo again!

Brandon's Hop Blaster is a great tasting beer and for a meaningful cause. Hope Yazoo adds it to their regular selection. I had a couple of pints and a growler of Hop Blaster for home.

One of the best beers I have ever had, really enjoyed it!

Since I live in NJ, I wanted to know if there is any other way to make a donation other than visiting the brewery.
Thanks