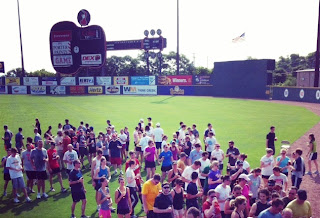 If you did a search for “beer run Nashville” a few years ago, you’d bring up all the Garth Brooks-vs.-Todd Snider controversy over who wrote the song of the same name (Todd Snider’s original is much better).  But recently, there’s been a surge in popularity of another type of “beer run”: getting up on a bright Saturday morning, running a few miles, and enjoying a cold brew with friends at the finish (or even during the run!)  Yazoo Brewing has been organizing “Barely a 4K” Beer Runs across the South the past year with a growing group of runners at each one.  Our most recent 4K had runners exploring a route that included the historic Nashville City Cemetery and Fort Negley, and ending with a celebratory lap around the infield at the Sound’s Greer Stadium and a cold Yazoo from the concession stand.  Whether you’re a marathoner or just getting started, a beer run is a great way to reward yourself for the effort.  See you at the next one!
Posted by Linus at 8:08 AM

Where can we find the schedule of these Beer Runs?