Bottle it for a sunny day... 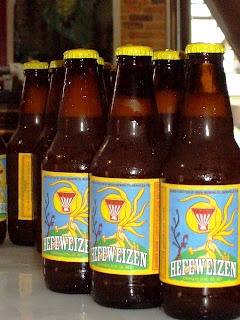 Well, it's a cool, rainy day here in Nashville. Surely we have made up for the drought last year by now. Let me tell you, the old Marathon building is not the most fun place to be when it rains. We put a new roof over our space when we built it out in 2002, but the rest of the building... let's just say it's weatherproof-challenged.

But we're bottling our Hefeweizen today! Just watching all those bright yellow labels rolling by makes me think of popping off the cap of one in a couple weeks, when hopefully the weather will have improved to the typical sunny April days we usually have here in Nashville.
It also takes a couple of weeks after bottling for the Hefe to reach its prime. Why? Because we follow a traditional German method of adding the carbonation to the beer. The day before we are going to bottle Hefe, we brew a new batch. Then just before bottling, we dose in a portion of the new, unfermented beer into the bottling tank, and then package it. The new, unfermented beer is full of malt sugars and live, young yeast, and it undergoes a secondary fermentation in the bottle. The carbon dioxide the secondary fermentation creates is trapped in the bottle, boosting the carbonation to the high levels typical of Bavarian hefeweizens, and giving the beer a smooth, creamy texture and mouthfeel. We won a gold medal at the 2004 GABF with this beer in its draft version, but I actually think it's even better in the bottle. For the best flavor, I recommend pouring about half of the bottle into a traditional Hefeweizen glass, swirling the bottle to rouse up the yeast, and then finishing the pour.
And an update on where it can be found - it's been in Kroger grocery stores since January, but Publix just recently added it to their Yazoo selection as well!
Posted by Linus at 8:24 AM