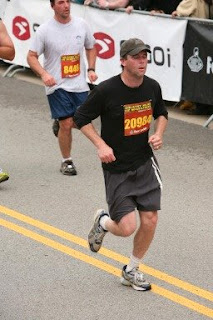 PROOF THAT BEER IS GOOD FOR YOU

I drink, therefore I run.

That sums up my exercise philosophy right there. A good ten miles on the weekend seems to keep the beer gut in check. I always say I have a six-pack stomach, but it's on the inside where you can't see it.

So my training for this year's half marathon was to run a little on the weekends. Then one month before the half-marathon, I hurt my knee and decided to take some time off. One thing lead to another, and I missed the entire month - no running at all. And then, the night before, my wife calls and says meet her and the kids at our friend's house for some drinks and bbque.

Our friend has come up with what she calls "beer-garitas". Basically a can of frozen limeade, then fill the empty can with tequila, and add three pale ales. They were delicious! I had four, then decided to switch to beer. Well, at ten-thirty we made it home. At four-thirty the next morning, I awoke to a hangover and a steady cold rain on the windows. Man, it was hard to get out of that warm bed and head out to downtown to stand in the cold rain for two hours waiting for the start.

But I made it in under two hours! And felt the best afterwards in five years of running the race. So it just goes to show, beer makes you a better runner!
Posted by Linus at 3:46 PM

Been there when I was in the Army and stationed in Germany...ahh, I do miss that country! CONGRATS on the race!