New Brewmaster's Special on Tap at the Taproom 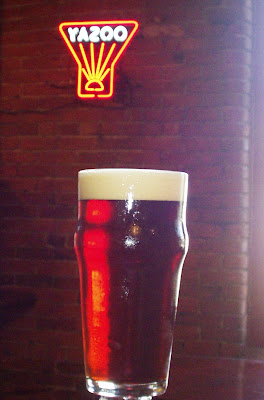 We're glad to have the latest of our Brewmaster's Specials on tap at the Yazoo Taproom. We're taking a break from the Hop Project IPA series, until we can score some more hops (probably after the harvest in September). There's a shortage of hops, and barley prices are through the roof, but there's still one ingredient that is still relatively easy to experiment with. That's yeast!

We're calling this one "Brother Ken". It's based loosely on a Belgian style, but like most Belgians, it's got its own personality. It's the brainchild of Ken Price, one of our brewers. Brewed with some Belgian aromatic malts and a bit of rye and crystal 60 malt, and fermented with blend of Belgian yeasts, the beer is big, with a beautiful red hue and a wonderful malty, slightly funky aroma. Maybe if you corner Ken at the brewery, he'll tell you what secret blend of spices he used. We don't know, he waited until our backs we turned to throw them in the kettle.

I had 1 of these last week when I was in. Is it the yeast that gives it that "twang"? I ask cause I brewed a ESB, my actual first solo homebrew and it has a very similiar twang as your Belguim. I had some BLVD Lunar Ale recently that had that twang. I thought that was due to a infection?

I loved the new brew! I didn't get a chance to taste it in person at the brewery, but a good friend got a growler for me since I live down in Tullahoma. I sure could drink some Uncle Ken everyday of the week! It kinda reminded me of Paulaner's Salvator--which happens to be my favorite big-name German brew.