Yazoo in the Gulch 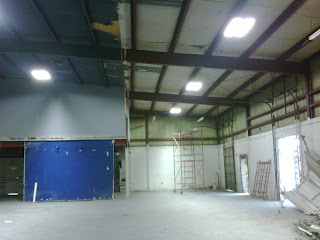 If you have ever taken a tour of the brewery, you know how tight it is back there. We've crammed tanks and equipment in every conceivable corner, and for the past year it's been like brewing in a submarine. And we hate seeing people having to wait so long for a beer or a growler now, due to our cramped quaters. So late last year we took the plunge and started planning a much bigger brewery.

We bought a building at 910 Division, right behind all the condos going up there. It has a wide-open floor plan that will allow us to brew about four times as much beer as we can here at Marathon. We're also planning a bigger taproom with an outdoor beer garden, with the same concept of local cheeses and bread to accompany the beer.

Construction will start soon, with our contractor ripping out some of the old interior walls and beginning on some concrete work to install new drains in the brewery. Luckily, we won't have do as much to get the building up to codes as we had to do here at Marathon. The new brewery should be arriving in October, and we already have three 80 bbl fermenters and an 80 bbl brite tank sitting in the yard under tarps. If everything goes well, we hope to be brewing there in early 2010. Check back here for pictures as we progress. It's going to be a long process, with lots of regulatory permits to get that may delay us, but we've done it once before so we won't be surprised!

What will happen with our space at Marathon? We would love to continue to have a presence there, after all the work we put into it and the goodwill we generated for the cool old building. It's a great space, and we have a great relationship with the owner, but we had to make a move to continue to grow. We have some interesting irons in the fire for ideas for this space, but right now are focussed on getting the new brewery up and running.
And to all our fans - don't worry, we aren't going to change anything! Still going to be making the best best beer we can, by people who love what they are doing!
Posted by Linus at 7:56 AM

Good luck with the move and the expanded production. I'm hoping this leads eventually to seeing some fine Yazoo beer in your home state!

Linus- You should consider keeping the old space operable for more experimental smaller batches. Yazoo beer is incredibly well-crafted, and at least one fan would like to see you push the envelope a bit more... as you have started to do with the Hop Project.

Sounds awesome. It sounds like it could be similar to the Sweetwater brewery, which is very cool. Maybe somewhere to look for some ideas?

I personally like the idea
of the move. A nice up and coming part of town is a great idea for the tasting room, and the expanded brewing space is also a huge plus. I wish all of you the best, and I'll probably be around a lot more since you're going to be across the street from my good friend's house.

p.s. I'm also available if you ever need an extra
set of hands around the place.

Sweetwater? Never heard of them ;)

Right on, Linus. Way to go, and congratulations on all your success with Yazoo!

Looking forward to a bigger space and shorter lines, but I'm gonna miss being a bomber run down charlotte away from the marathon location for a cold beer on a hot summer night in the courtyard (and, of course, a couple of growlers to go)

BTW, what's up with the naming contest? Winner soon?

Welcome to the neighborhood!! Glad to have you..Michael

Great news. Glad all is going well, Linus. Having moved to Atlanta from Nashville a few months ago, I really miss my weekly stop at Yazoo, but I'm glad to hear you guys are continuing to expand. Hopefully, someday I'll be able to buy Yazoo down here in Georgia. By the way, say hello to Brian and Brandy for me. Love those guys. Best of luck with the move and expansion. Cheers!

wow that is great news! I am going to miss the old building.. but you guys sure could use the space.