Hop Project #30 out now, on draft and in six-packs! 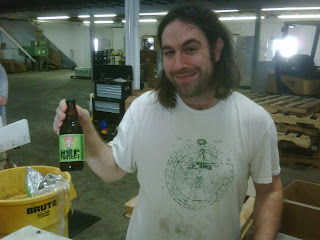 I expected that when we moved to a larger batch size that we would slow down the progression of new batches, but it seems you guys like your hops! Here is the description to cut and paste into ratebeer.com:

"Bottled on 6/15, indicated by a notch on the side of the label at June and week 2. For #30, we used a blend of Magnum, Columbus, and a new variety, Citra. Citra is a new variety released by the Hop Breeding Company in Yakima, WA. It's supposed to be a cross between Hallertaur Mittlefrueh and U.S. Tettnanger, but somehow bred to yield much higher bitterness. Its alpha acids come in around 12%. Our beer starts with a pleasant mellow and fruity aroma, with a rounded mellow up-front bitterness that fades into a sharp peppery finish."

I can really taste the Tettnanger part of this hop, the peppery finish. It would go great in a Saison. Maybe next year for our spring seasonal Rye Saison?

Look for Hop Project #30 out in six-packs and kegs by this weekend. We also will have a special small keg of this on tap this Thursday June 17, aged with Drew's Brews "Lost Weekend" coffee. Yeah, an unusual combination - but I always wanted to try to match the earthy bitterness of a good coffee bean with a hoppy IPA. If you want to know how that turned out, come down to the taproom this Thursday!

Follow us on twitter @yazoobrewmaster and @yazoobrew to catch details on other special small releases. Hop Project #31 is already in the tanks!
Posted by Linus at 9:04 AM