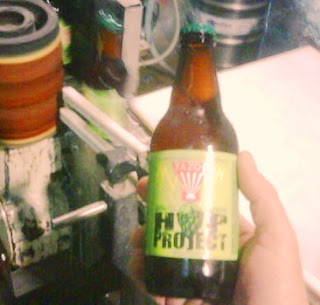 We bottled Hop Project #13 yesterday, the first batch out in bottles! It will be the next beer in our four-pack Brewmaster's Reserve packaging, and should be hitting the shelves next week. Look for it first in the usual suspects, like Midtown Beverage, Frugal Macdoogals, and other fine beer stores in Nashville. It has also gotten approval for Whole Foods and Krogers, so later on you should see in your local grocery stores.
You can identify Hop Project #13 by the "Bottled on" date marks on the side. There will be a notch for April, and "1" for the week bottled.
As with the first twelve Hop Projects, we used a different blend of hops for this one. For all you hop enthusiasts out there, the hops we used were: Galena and First Gold for first wort bittering; Cascade, Apollo, and First Gold at thirty minutes for flavor; Simcoe and Amarillo at five minutes left for aroma; and finally, we dry hopped the beer at day four of fermentation with Galena and Cascade.
To check out some reviews of other Hop Projects, visit http://www.beeradvocate.com/ or http://www.ratebeer.com/, and type in "Yazoo" in the search engine.
Cheers,
the Yazoo crew
Neil, Quinn, Ken, Ivan, Colin, Chris, Linus, Brian, Brandi, Beth, Dave, and Kelly
Posted by Linus at 7:10 AM

Hop Project at Kroger. Hell yeah!!! My Kroger is lacking in the IPA department. Actually the entire beer department could use some help