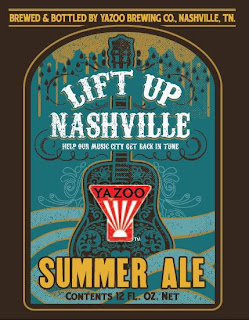 Our newest seasonal release was about ready to bottle when the floods hit in early May. It seemed that the only thing that matched the scale of the damage was the overwhelming generosity of the people of Nashville in the weeks that followed. We had our own fundraiser for the Community Fund of Middle Tennessee the week after, but we wanted to figure out a way to keep that momentum going throughout the summer.

We decided to donate part of the proceeds from our Summer Ale to flood relief programs. One of the local artists who created one of the great posters for sale at www.LiftUpNashville.com, Derrick Castle, agreed to donate his artwork for the label.

We will be donating 20% of the sales of our Summer Ale to the Community Fund, and our distributor RS Lipman has agreed to match that as well. Look for it in our "Brewmaster's Reserve" four-packs in area stores, and also look for special events around town where it is on tap.

Summer Ale is a light clear golden ale, with a crisp hop bitterness. It's
totally refreshing in the summer heat, and wherever you see it this summer,
know that part of your beer money is going directly to help your neighbors
rebuild!
Posted by Linus at 4:21 PM

Are there any poster prints of the artwork available?

Are you going to post any info on the June 27th Galaxy Star Fire and Ice Festival, ie; Time/Location? Good article in the June 13th Tennessean :-)~

When can we expect to see this label in the stores? I've looked for it Smyrna, TN and the Brewmaster's Reserve I found wasn't the Summer Ale.

Having some for the first time right now... Tasty...