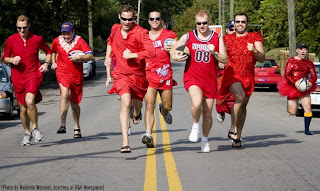 Save the date - October 23rd, the infamous Nashville Grizzlies Rugby team is once again putting on the Grizzlies Red Dress Run. It's a combination 5k run/ pub crawl through the Belmont and Hillsboro Village neighborhodds, with registered runners getting a free Yazoo beer at the five pubs along the route. It's great fun and the proceeds will benefit the Belmont Theatre, Nashville’s most unique operating community theater for film and entertainment, and the Nashville Grizzlies Rugby Football Club.

Watering Holes on the 2010 route include:

The race is all about having fun, so here are the awards given out:

You can register at www.grizzliesreddress.org